A Walk in the Park

Radio hire: a walk in the park? 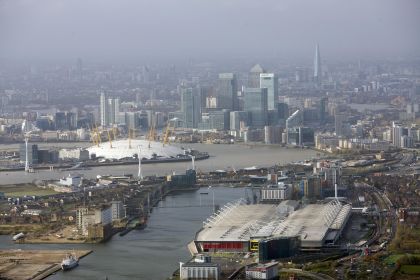 What needs to be considered when hiring radios for an event? Laurence Doe delves into the questions organisers should be asking their suppliers.
It’s not a ‘one size fits all’ situation for communication systems. Different events require different radio systems, and that requires preparation far in advance of an event. Almost any need is provided for, including the supply of explosive atmosphere ATEX compliant handsets.

Dedicated exhibition venues such as the NEC Birmingham and ExCeL London will often have a permanent radio system for day-today operations. But this doesn’t mean that these and similar locations are ready for the events they will host.

“Normally, depending on the size of the event such as Olympia or ExCeL, back-to-back radio is fine,” says Leatherby. “But if you start to use more than one hall at these venues, or you’re outside, or there’s a greater distance, then you need to look at repeaters and you need someone to survey and check this before the event.”

“We spent a whole day with DSEI organisers working out the talk groups in terms of who should speak to who,” says Leatherby, adding that a display radio was important for demonstrating different talk groups and contact numbers. “You don’t want everybody to speak because the radio waves get filled with people having chit-chat about going to lunch. So it’s very important that people can talk one at a time. Making sure talk groups are relatively organised requires lots of planning.”

The radio manufacturer chosen by a customer relies heavily on design features, explains Leatherby. He’s found that demand is high for smaller radios amongst those managing operations because of the convenience of having a lighter and subtle handset. However, security guards are opting for larger “robust” radios with the addition of earpieces and other accessories.

Radio hardware and software features can also be limited by whether the technology is analogue or digital and will impact costs depending on the users being provided for.“ A problem arises when you have a lot of users requiring as many channels as possible, maybe eight or ten channels. Using analogue you would need one repeater per channel, while with digital you need one per two channels. This becomes an issue because using so many repeaters is very expensive and is not practical,” Leatherby continues.

“[Knowing] how to use the radio is very important. We’ve got guides and we tell people to look at our YouTube videos because they can access them at any time … some people will not even know how to turn the radio on or how to change a battery but having our ‘how to’ videos stops someone from being embarrassed that they don’t know how to use it. It’s the duty of the organiser to say ‘right, I want you to watch those videos prior to the event’.”

Don’t falter on frequency
With some events always taking place outdoor, at the same venue, or every one or two years, it is not commercially viable for a hire provider to leave infrastructure installed on-site. “As the same organiser may work at a number of different venues over the course of a year, it is more cost effective for them to hire radios for the build-up and event and strip-down than to purchase equipment that will sit idle between events,” says Martin Edwards, head of product management at Hytera UK.“ In certain situations, hire providers may supply and install the radio system infrastructure on site to guarantee good radio coverage across the event venue and limit any possible interference from other hire radio users in the same location.
“As the required coverage doesn’t change significantly, radio handsets can be hired as required, gradually increasing as the buildup continues and then reducing during the strip-out.”
“This gives event organisers the flexibility to increase or decrease the number of radios in use as their operational requirements change. Sometimes an event will be held at a one-off location, such as the Ryder Cup [an international golfing championship], and so additional planning and site surveys may be required prior to deployment.” 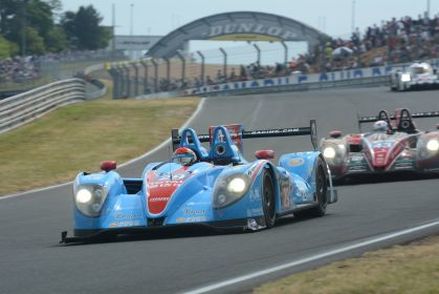 Frequency management is also another key consideration in the case of outside events, especially at festivals, explains Mike Baker, hire business manager for 2CL, a wireless business solutions provider. He advises that the large uptake of radios coupled with the way that each dealer leases out all of their radios on the same license and frequencies by default.
“If you turned up to a major event – say Reading, Glastonbury or Leeds festivals, there’s lots of radios being used,” he adds. “If everyone turned up using their standard hire frequencies then they might as well not have radios because they would just interfere with each other, so frequency management is also a big part of the larger events.”
In August last year, Sports Marketing Surveys Inc. reported that there are 10.5 million runners in the UK. If you’re looking to organise a charity fun run you should think carefully about how you and your team use radio, to prevent you from being surprised by the potential costs.
“A job using 50 radios for a ten kilometer run sounds fairly simple, but don’t forget that a radio won’t work over that distance, so you have to look into the costs of infrastructure, installation and coverage surveys,” explains Baker.  “The cost of £7 per radio each week is a small part of it. “It costs £200 to £300 to replace a single radio,” he adds. “You may hire 20 radios costing £200 for the weekend but could end up losing two of them.”

Analogue or digital?
Since the invention of digital radio there’s been a shift from analogue as  everyone likes the ideal of individual calling”, says Chris Brown, account manager for radio engineering company Smye-Rumsby. But what customers may not realise is that making an individual call between two or more users ties up half a digital repeater’s capacity while the call is in progress, as the call uses one of the repeater’s two voice paths.
“With multiple group calls and individual calls available to users the digital repeater quickly becomes too busy,” explains Brown. “With analogue radios without signalling, private calls were not available, therefore all calls were made to all users. In this instance all users would hear the conversation and know that the channel was busy.
“With digital communications you would not know that a private call was taking place unless you were involved with it and therefore it can leave users feeling frustrated when they are keying up and the repeater cannot be accessed.
“To them, they’re on the ground – there is no logical explanation because they cannot hear others talking. This is why careful planning, advice and guidance are fundamental aspects of what we do.”
But digital radio is much more popular than its analogue equivalent according to Brown. This is due to encryption, efficiency and audio quality – with ambient noise suppression being a standout feature at events.
“We do a lot of work with the NEC Birmingham … and they love digital for the noise suppression especially in big meeting halls where a lot of echoing happens,” adds Brown. “We have projects where two or three hundred radios are out on hire. The technological advancements of digital have allowed a lot more for less money.
“Analogue still has a place for my customers … but the balance is beginning to tip towards digital. Customers like the additional functionalities that are available and most customers value the inherent encryption that is achieved with digital radios.”
“Many of the digital systems now available offer a whole host of additional features which can help customers streamline their business activities such as text messaging, man down alarms, lone working alarms, and GPS tracking,” Brown adds.
Features that you should consider after you’ve selected a manufacturer include whether or not a system has dedicated emergency capabilities for situations where the users may be at risk. Another is the IP (Ingress Protection) rating, which indicates how well equipment can withstand the elements, the classic example for the UK being torrential rain. If the technology is not resilient enough for your venue, it could lead to a large bill when you have to return the now damaged equipment to your hire provider. However, if this happens you may not incur the full cost “as it could be argued that in this situation the fault would lie with the hire provider for not issuing the right kit”, advises Brown.
“Our repeaters are delivered in cases and battery backup can be added in most cases to ensure resiliency when you need the equipment most,” Brown concludes.
​
Practice makes perfect
One of Smye-Rumsby’s most high-profile projects is Broadstairs Folk Week in Kent, which attracts thousands of visitors each year. With events taking place all over Broadstairs, high street and seafront communication is critical. 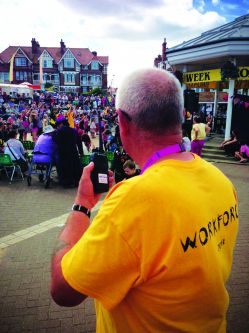 The Broadstairs Folk Week workforce needed to communicate throughout the town without having to change channel, while its management required a simple, reliable communication method that provided blanket coverage. Broadstairs Folk Week opted to hire equipment from Smye-Rumsby rather than purchase, removing the associated costs of owning equipment such as battery replacements, servicing and Ofcom licensing as this was all handled by Smye-Rumsby. A site survey was necessary to inform decision-making and ensure full coverage over the three-mile radius of varying topography staff would be covering.
The event organiser trialled Motorola Solutions’ digital hand-held radios to establish if a repeater was needed to boost the radio signal to ensure that radio coverage extended to the extremities of the workforce’s area.
Broadstairs Folk Week chose MOTOTRBO DP4400 UHF radios and a MOTOTRBO DR3000 UHF digital standard repeater, on the advice of Smye-Rumsby, to provide clear communications through built-in ambient noise suppression and wind porting. Earpieces and spare batteries were supplied to support the workforce throughout the day and radios were in constant use for almost 12 hours.
“Because we’re in a town we’re spread out all over the place right down from venues on the seafront, right back up through the town to our festival campsite,” explains Jo Tuffs, festival director for Broadstairs Folkweek, which had around 500 events taking place over 7 to 14 August.
“We rely on around 250 volunteers to keep the festival running, so it’s absolutely necessary that we can communicate with all the volunteers who are doing a variety of jobs such as driving the minibuses, running venues and selling tickets. It’s vital for us especially as the phone signal in Broadstairs is rubbish.”

Top tips for the short-term​
Further insights from Martin Edwards…